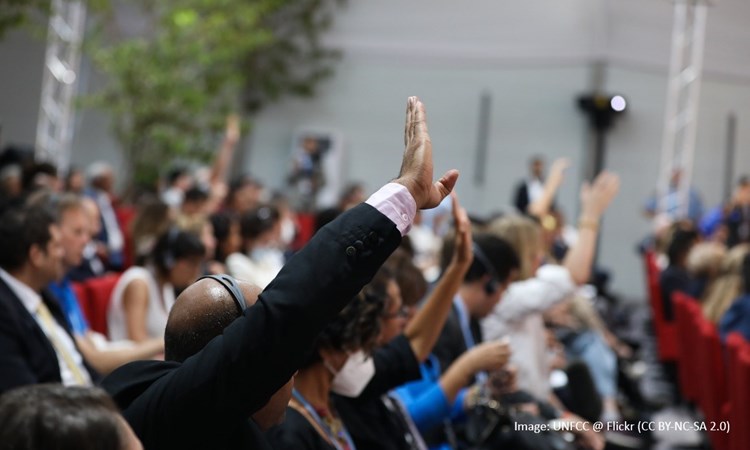 We are approaching the halfway mark of this year’s COP27 in Sharm El Sheikh, Egypt, and the key discussion threads are still developing even as negotiations begin to get underway. While much of the first few days have been dedicated to climate finance, providing funding streams for developing countries to mitigate and adapt to climate change, we followed the discourse on day four: Youth Action and Science Day.

This morning we tuned into a panel lead by Adessou Kossivi, of the Climate Action Network, that promised to steer the conversation towards finding practical solutions for those who are already feeling the impacts of climate change – the countries on the front line.

Farah Kabir of ActionAid Bangladesh argued for the need for solutions that work with the natural environments around the most vulnerable regions and populations. As climate change drives and increases in the frequency and severity of natural disasters, Kabir says that “Nature based solutions, localised solutions, are the way forward.”

Besides the long-term international agreements, part of the key outcomes of the COP (Conference of Parties) conferences is the sharing of knowledge, perspectives, and best practices through smaller panels and side events. These events promise to encourage local actors to adopt actions such as nature-based solutions, a group of activities that span both climate mitigation and adaptation efforts.

We spoke to Mike Morecroft, an ecologist and conservationist at Natural England, who is attending the conference in his capacity as an IPCC (Intergovernmental Panel on Climate Change) contributor, about nature-based solutions such as reforestation.

Protecting existing forest cover, and restoring areas that have been historically deforested, was a key talking point at last year’s COP26 in Glasgow. When done right, increasing forest cover sequesters carbon into the trees themselves and the soils they grow into, and helps ecosystems adapt by providing safe havens for animals and other plants that may otherwise struggle to cope in a warming world.

As such, several countries signed an international commitment to put an end to deforestation by 2030. However, as Mike highlighted to us, commitments mean nothing in themselves without the political will and financial means to implement them. Also important is the regulatory framework to measure and monitor the success of such projects.

Alongside funding for mitigation and adaptation – the missing $100 billion of climate finance – this year we are hearing voices calling for additional funds to cover “loss and damage”. It will be hard enough to quantify the costs to human livelihoods incurred by climate change, let alone the losses and damage to natural ecosystems. But it goes beyond this – while Mike says we may be able to quantify the services ecosystems provide to meet basic human needs, “it’s impossible to put a value on nature itself.”

Despite the hope provided by nature-based solutions, there is a danger in losing focus of the two most effective actions in the race to curb climate change: leaving our remaining stock of fossil fuels in the ground and stopping farming animals at scale. If large decarbonisation efforts are not made in these and other sectors, whatever carbon removals can be won by nature-based solutions may end up being a drop in the ocean compared to continued global greenhouse gas emissions.

While many of climate change’s impacts are already baked in, many can be avoided by rapid and comprehensive change. Without impetus and funding from developed countries, the worst humanitarian impacts of climate change will not simply be felt by the most vulnerable people in localised contexts: they will be felt worldwide through vast population displacements and climate migrations as people leave livelihoods and communities behind in the search for safety and security. In such a world, Farah Kabir says, “it’s not a choice, it’s a matter of survival.”

To view the panel discussion mentioned above, see: Localized Solutions to Reduce Climate Induced Loss & Damage for the Most Vulnerable