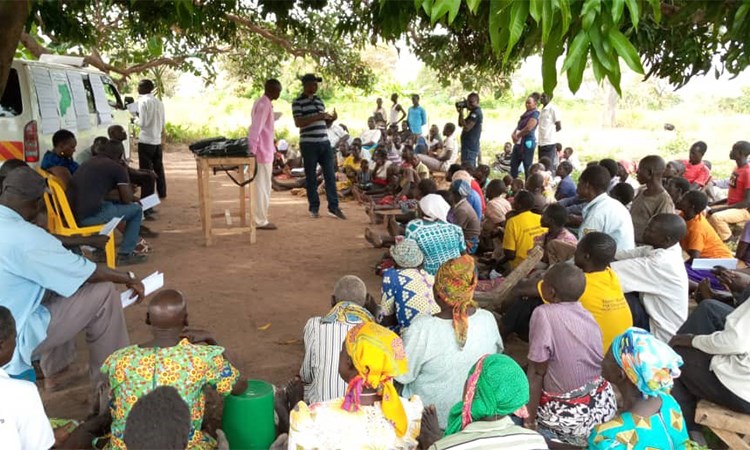 In solidarity with the United Nations recent declaration of ensuring all people are protected by Early Warning Systems (EWS), our research is promoting community-led approaches towards flood disaster risk reduction by putting at-risk communities at the centre of the design and implementation process towards a more  locally-targeted EWS.

Main image: Farmers discussions on how the rain season will be during one of the Farmers Agri-Met Village Clinics (FAMVACS) in Anyangabella Village, Katakwi District. Phot credit: NIMFRU project

Climate variability and environmental changes have led to an increase in the frequency and severity of floods worldwide. In 2020 floods were the most common disaster type with a 23 percent increase in the number of events between 2000 and 2019. In Africa floods affected over 7 million people in 2020, the highest since 2006 (CRED, 2020).

Rural vulnerable communities are most at-risk as they exhibit low coping capacity and the  lack of localised tailor-made early warning information (EWI) to inform coping practices. If nothing is done, these communities will continue to suffer from the devastating impacts of extreme flood events.

Investing in people-centred early warning systems is critical in helping ensure that communities have the EWI they need to prepare for flooding. Technology has contributed to significant advances in forecasting science which has improved forecast skills and EWI reliability but the communication and use of EWI among the rural communities have not advanced in step. What is more, most least developed countries do not have a national forecasting system,  making anticipation and preparation even more challenging.

The potential for effective EWI can be achieved if it is timely, understandable, and instructive in supporting early interventions. Information should also be coupled with likely consequences to ensure that targeted early interventions can be designed and prioritised.

Working alongside our Ugandan partners representing National disaster management, the National Emergency Coordination and Operations Centre (NECOC) and Uganda Red Cross Society (URCS), as well as multiple local partners we explored how community led approaches can be used to redefine the development of early warning systems (EWS) and anticipatory actions. This approach represents a shift from top-down to bottom-up methods of early warning design to inform the development of locally-targeted EWS.

Community-led approaches for anticipatory actions are based on engagement with at risk communities and decision makers, and can be an effective way to ensure that:

Based on a case study in Uganda, the community-led approach was applied across three key research areas as elaborated below. The information gathered from this research was then combined to show how the different components of a people-centred EWS can be improved to ensure the most at risk population is protected.

We used a community-led approach to allow the smallholder farming communities in Katakwi District, Eastern Uganda tell their stories about how their weather has changed and how that has affected their livelihoods.

Farmers vividly recall recent flood events and impacts and can describe them in detail.  For example, at Farmers Agri-Met Village Clinics (FAMVACS) (Ciampi, 2019) held in 2019 under the National – Scale Impact – Based Forecasting Flood Risk in Uganda (NIMFRU) project, farmers from 3 villages were able to recall the months that they experienced crop damage due to floods and water logging in 2017-2018.  The farmers also related why they are not able to utilize the weather information in its current format to inform coping practices.

“Weather information is available via bulletins at the sub-county offices but we are not able to interpret and use since the bulletins are written in English.” [Farmers].

“Farmers require weather information 2 months prior to the start of the season to help them plan the activities” [Disaster Responder].

Having such contextual information can help the providers (i.e., the disaster management practitioners and hydrometeorological organisations) of EWI understand what the at-risk communities need and how such information should be communicated to help them respond in time. As noted in other similar research by the Start Network, enabling communities to act in anticipation can help reduce the likelihood and severity of the impacts associated with the extreme events.

Similarly, it is important to understand the challenges experienced by these providers in generating and disseminating reliable EWI for at risk communities.  As an example, a common obstacle is access to quality early warning data.

By listening to both communities and EWI providers, we were able to map barriers and opportunities in the production, provision and use of EWI.  This was useful in the design of early warning mechanisms for example, knowing preferred community coping practices allows tailored interventions to be designed.

Ensuring credible forecasts are available even in data-scarce regions

We drew on our World Meteorological Organisation (WMO) award-winning work on forecast verification using non-traditional observations on flood impacts. Our work showed how early warning mechanisms can be developed even in data scarce regions such as Uganda and much of East Africa by applying community knowledge of the impacts of flooding.  Historic local flood impact reports are combined with forecasts from a global system such as GloFAS (Global Flood Awareness System) to refine reliability.

Information collected from  at-risk communities can provide valuable contextual information about their lives and livelihoods. Such information can then be combined with EWI to help better define ‘flood triggers’ – the points at which floods are likely to have significant impacts. The information can also inform the design of more targeted interventions. One source of information is crop calendars that can show when food production is particularly vulnerable, such as during harvests for example.  At such times protective interventions can be prioritised.

Integrating the outputs from a community-led approach to improve EWS

1)  Risk Knowledge – awareness of the people and areas at risk

Examples from our research in Uganda illustrate how the components can be improved:

Broadcasting EWI via local radio at 8pm maximises the likely audience as this is when all family members are likely to be available to listen in.

As described above, even in countries such as Uganda do not have a flood forecasting system, global systems such as GloFAS that have been verified using local contextualized information can be used to inform early warning decision making and actions.

By combining contextual livelihood information in the EWS we were able to move from ‘one size fits all’ flood triggers and interventions to context specific triggers and actions.  For example, the current approach in Uganda that is based on pre-defined triggers and pre-agreed actions can be redefined so that triggers are adjusted to activate actions at critical times even though the magnitude of the flood may be lower.

By redefining triggers and interventions our research is informing early warning early action activities in Uganda where initial discussions have been held with Red Cross Climate Centre to assess how Ugandan Red Cross Society (URCS) can be supported to implement the community approach within the existing flood Early Action Protocol (EAP).