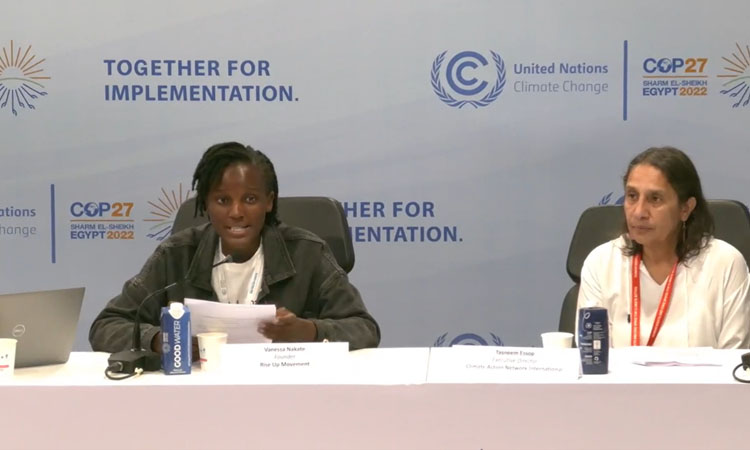 “Justice will not be served up on a platter, we will have to take it.” -Yeb Saño

This year at COP many people have spoken up about the issue of Climate Justice. We all live on this warming planet together but some of us are more vulnerable than others. Some of us are feeling the heat more than others, some of us are more responsible for getting us here than others. And now we’re all being asked to pitch in equally to fix it. Is that fair? For us here in the UK climate change has looked like longer heat waves and hose pipe bans For those in some developing countries climate change can look like flash floods that sweep away houses or droughts that drive communities to starvation. It is not hard to see who has it worse off.

It is also true that the younger generation are having to face up to the consequences of climate change more than older generations. It is us who are “Generation Anxiety”, who must wonder what our future is going to look like and if our future will even be livable. But for us younger scientists and activists in the Global North, we have more of a choice about how much we engage with our activism. For those youth in the Global South, activism has been forced upon them because of the destruction climate change has wrought to their home countries.

Today we had the opportunity to watch a very interesting panel on Human Rights and the Climate Crisis. The panel featured Dr Agnès Callamard General Secretary of Amnesty International, Yeb Saño Executive Director of Greenpeace Southeast Asia, Vanessa Nakate Founder of the Ride Up Movement, Tasneem Essop Executive Director of CAN International and His Excellency President Nikenike Vurobaravu President of the Republic of Vanuatu. Together they raised the very important and equally frustrating point that our climate-related agreements and pledges so far have been voluntary in their take-up. It has been up to governments whether they create or adopt climate friendly initiatives and stick to pledges. There has been no enforcement as to whether governments are abiding by international climate agreements. In a way these agreements have been toothless with no weight behind them.

Vanessa Nakate from the Rise Up Movement, a movement aimed at giving African climate activists a platform for their voices to be heard, said, “We live the climate crisis, we don’t have the privilege of just learning about the climate crisis.” Her words perfectly encapsulate the inequality faced by youth activists in the Global South. How is it fair for them to sacrifice their childhoods so that our politicians in the Global North can prevaricate about whether we should pay them their dues.

The panel discussed the possibility of making these agreements legally binding through the International Criminal Court (ICC) and making ecocide a crime. This movement to make ecocide a crime, Stop Ecocide Now, was started in Vanuatu, an island nation, another country facing the impacts of climate change while bearing the least responsibility towards contributing towards it. They define ecocide as “unlawful or wanton acts committed with knowledge that there is a substantial likelihood of severe and either widespread or long-term damage to the environment being caused by those acts.” It will be interesting to see if this initiative to bring in legal dimension of ecocide manages to make it past the voting stage at this year’s COP. If it does, perhaps we will finally be able to see some concrete steps towards climate justice.

To finish, we would like to reflect on the issue of time. Nine years ago, at another COP, Yeb Sano spoke up and said to world leaders, “if not now, then when? If not us, then who?” and today at the 27th COP Vanessa Nakate, an amazing young activist, said “if we don’t fight for our present, what kind of future will we be walking into?”. There are nine whole years separating these two quotes by two amazingly brave climate activists, and yet how much has changed for the better? Our oceans are full of microplastics, we are set to exceed the 1.5C goal set by the IPCC (Intergovernmental Panel on Climate Change) years ago, and it seems that every day there is a new climate tragedy in the news. Is this the world we want our youth to walk into? Why is it that young people like Vanessa must sacrifice their present and futures to fix the problems we knew about and should have fixed years ago? We owed it to them nine years ago to clean up this mess, and we owe it to them now.