I attended COP27 for the first time in person and it has been impossible to capture the totality of the experience, but I will do my best! 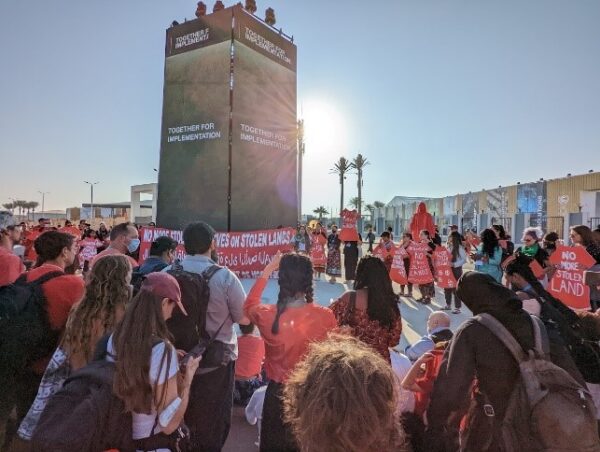 People protesting outside the conference center in Sharm el-Sheikh 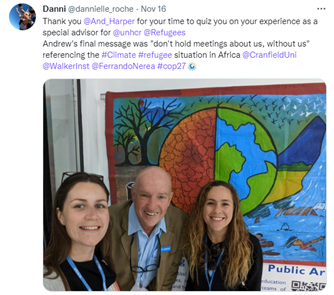 Andrew HarperDid you know that 70% of global refugees are moving because of some aspect of climate change? I learnt this from the special advisor to the High Commissioner for the UNHCR, Andrew Harper, during a short interview.

During a press conference towards the latter part of the second week, I heard about the effects of mass floods that occurred this year in Pakistan and their associated economic damage worth $30bn. We recorded an incredibly moving poem written by Pakistani climate activist, Ayisha Siddiqa, who read to us on the loss and damage inflicted by the Global North on the Global South. You can hear the recording here.

Similar climate stories will soon be a shared reality of the North. If we don’t cut our carbon emissions by 45% by 2030 (those of you who are quick at maths will realize that’s literally on our doorstep), we’re on track to surpass our limit of 1.5℃ global warming causing catastrophic global damage. This will be irreversible in my lifetime and for the lifetimes of any future children I may bear. The fact that this isn’t treated like an emergency unlike no other is absolutely mind boggling, and it felt at COP27 like being in the storyline of a movie where the obvious just isn’t happening and you’re on the edge of your seat hoping it will!

I want to spend the next section talking about key themes I took away from COP27.

1) CLIMATE FINANCE Topics around financing climate change came in various forms. For example, climate loss and damage compensation was a major topic of COP27, and the collective acknowledgement of the importance of this funding was a breakthrough of this COP!

The continued controversy and divide between the Global North and South on the ownership of historic emissions that have led to global climate impacts was still very much present at COP, but the way forwards was different depending on who you spoke to. For example, many delegates from Global South nations were very much invested in moving towards a future involving sustainable energy sources – albeit with the need of appropriate funding. However, other civil society members prioritised the urgent need to address poverty and hunger, and who thought that these issues could be addressed quicker through using fossil fuels.

I heard from delegates from various banks, including the World Bank, who discussed the difficulty in investing in seemingly ‘higher risk’ projects that may be sustainable in the longer-term and could provide a greater return on investment. I thought that there was still a short sightedness in this area whereby there was a lack of understanding or at least acknowledgement that if nothing is done now there won’t be anything to invest in in the future. However, I did hear a positive story from the African Development Bank about projects such as the ‘Desert to Power’ initiative which aims to give power across the five Sahel countries with the goal of connecting 250 million people to electricity. Another funding project was called ‘SEFA’ Sustainability Energy Fund for Africa which is supporting a variety of sustainable resources including energy efficient cooking off-grid. The most important message I took away from hearing these stories was that these projects were catalysing more projects and leading to a snowball effect of investment into sustainable projects in Africa which is fantastic! 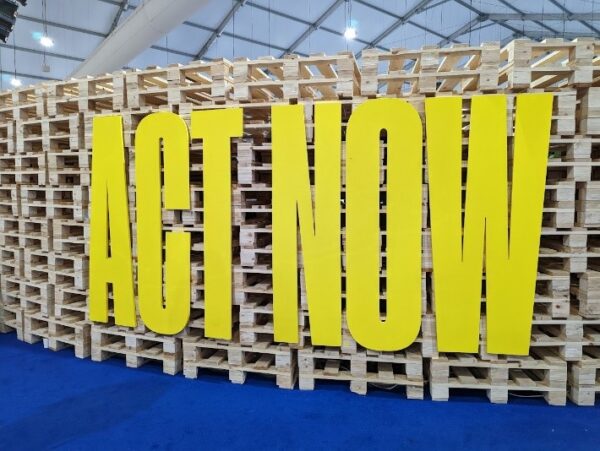 2) FOSSIL FUELS. Another major theme was the lack of phasing out of all fossil fuels. I was hoping that by the time I was writing this blog that the need for phasing out all fossil fuels would be clear through the outcomes from COP27, but unfortunately that hasn’t happened. The current report focuses on coal only which I think leads to a road that allows natural gas to creep in as a ‘transition fuel’ which will lead us over the tipping point of that 1.5℃ upper limit for global warming. It is really disappointing to see this, especially after COP26 outcomes last year which were seemingly raising the urgent need to phase out all fossil fuels. If there was one thing to bring my hope down in the global warming ‘sphere’ it would be this question: why are we still subsidising fossil fuels when we know they are leading to the death of humankind, and why, when we have impressive growth in renewable technologies, are these subsidies not being used more wisely in the renewable sector?

3) NATURE BASED SOLUTIONS (NBS). The importance of working with nature in every aspect of dealing with climate change was highly visible, and arguably more so than anything else at this COP. Biodiversity Day was a brand-new theme for COP27, although you could be forgiven for not knowing about it as it could have had far more publicity! I was told in a side event on the day that thriving biodiversity on our planet can mitigate around 30% of the climate issues we face today. I listened in at another side event on NBS, specifically for climate and water resilience, which highlighted that NBS have a wealth of benefits from climate mitigation measures to adaptation in the wake of biodiversity loss, and even the provision of jobs.

The importance of NBS was clear at COP27 through seeing the provision of the ‘Enhancing Nature-based Solutions for Climate Transformation’ otherwise known as the ENACT initiative, which aims to boost NBS on a global scale. The initiative is chaired by Egypt and Germany, which will lead to the implementation of the initiative – but we will have to see what this means in practice. Another COP learning has been that countries can easily pledge to show interest in an initiative, but then the challenging work and real commitment comes a lot later.

On the topic of pledging interest in initiatives, I attended a ministerial event on the issue of melting ice on sea level rise and mountain water resources. I heard here that it is already too late to save glaciers in Indonesia and Africa, but in order to save those elsewhere, such as the European Alps, it is vital to stay within the upper limit of 1.5℃ warming. Several countries in this event pledged to increase efforts in the preservation of the cryosphere. Hosted by Chile and Iceland, they expressed their desire to expand the list of countries to not only include those with large glacial mountainous regions, but wider regions too. From my understanding, this was the very start of a declaration of interest and future work would be needed to put this into practice. However, this first step was great to witness firsthand! 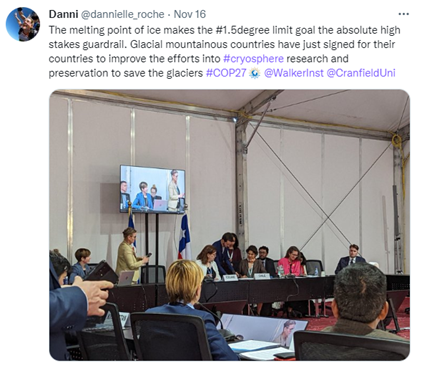 In summary, I feel that there were some successes coming out of COP27. The acknowledgement of the need to have a loss and damage climate finance mechanism. Although this tentative agreement was overshadowed by several questions, including: Who and how would it be funded? Who would be eligible? And how many more years will it take until it is operational?

There were also big failures such as the limitations of phasing out all fossil fuels, and the focus only on phasing down coal with no commitment to stopping fossil fuel subsidies.

I want to round up this blog by reflecting on people. People are both the drivers of climate change and directly affected by it too (you and I included). I saw first-hand at COP27 the scope of this issue, and I cannot put into words how important the issues of mitigation and adaptation to anthropogenic climate change are. A global effort is needed to work together as a team to fix this issue. We have no other option but for every nation to act to turn the tide on climate change otherwise there is no future for any of us.

Finally, I leave you with this quote by an unknown delegate at a biodiversity press conference I attended at a COP:

“Climate is not a thing, it’s everything.”

A heartfelt thank you to the Walker Institute and the FoodBioSystems DTP for giving me this incredible opportunity. From a professional and personal perspective, I have learnt and gained so much. As for COP27, I hope it turns out to be just as impactful.